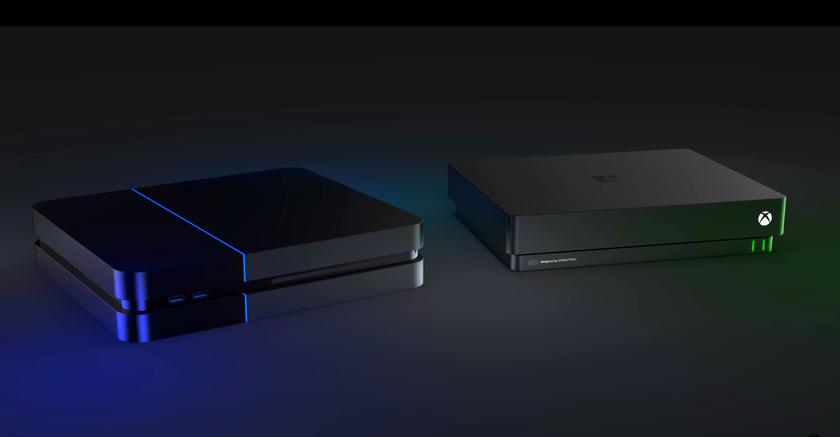 The network has already got photos of the PlayStation 5 for developers. The console design is not final, but the developers

there is already "iron", focusing on which you cancreate a new generation of games. The Devkit PS5 already appeared at Sony's internal studios and third-party developers, but Microsoft was far behind schedule.

Twitter user wondered whyPlayStation 5 for developers has already “lit up” on the Web, but the “devkit” Xbox Scarlet remains a secret? As The Verge editor Tom Warner explained, Microsoft did not send out test versions of the new Xbox, as the console is not ready yet. The developers have not had time to work with Scarlet, because on the web there were rumors that the new Microsoft console was behind in performance from the PlayStation 5.

“Almost no one has them [“ Devkits ”Scarlett]No, and they are far from the final version. That's why rumors are circulating that they are not powerful enough and so on. Microsoft wants to surprise Sony this time, ”wrote Warner. The Verge Editor’s Words Launchdiscuss on the ResetEra forum where Kotaku editor Jason Schreyer also looked. According to the journalist, Microsoft is hardly trying to surprise Sony and, most likely, once again does not meet the deadlines. Even developers remain ignorant and “disappointed” by the lack of information about the Xbox Scarlet.

“Not sure if the expression is“ an attempt to surprise Sony “here it’s true - common sense tells us that, as with the Xbox One, Microsoft is just behind the schedule and is working in haphazards - but I spoke with several third-party developers who said they were disappointed by the lack of information about Scarlet, especially compared to Prospero [PS5], ”wrote Schreyer.

What is known about the PlayStation 5 and Xbox Scarlet

There is really more information about the PlayStation 5. The console will receive an 8-core AMD Ryzen processor on the Zen 2 microarchitecture, and AMD Radeon Navi graphics card will be responsible for the graphics. Sony communicates ray tracing support, but fast boot will be the main feature of the generation. Judging by the latest news, the company plans to use Samsung SSDs. In addition, the PlayStation 5 will receive backward compatibility with the PS4 and support for the VR-headset PlayStation VR.

Microsoft, in turn, is not interested invirtual reality and Xbox Scarlet is unlikely to get its own "helmet". But the characteristics will be similar, and the console will receive a Zen 2 processor and AMD's Navi graphics chip and SSD type GDDR 6. According to Microsoft, with this filling Project Scarlet will be able to “stretch” 120 FPS in games, 8K resolution, and ray tracing.