The new technology makes it possible to extend the shelf life of enzymes-indicators of poisons by several times. In his

turn, this significantly reduces the cost of storage. Details of the new development have been published in Catalysts magazine.

Enzymes are proteins that play a rolecatalysts in all living organisms. It should be noted that even a small amount of toxins significantly reduces the activity of enzymes. It is this property that scientists use when they need indicators to monitor the pollution of food and the environment - water, soil and air.

By observing the reaction of, for example, the enzyme butyrylcholinesterase with apple juice, scientists determine how much poisonous pesticides are contained in the sample, which enter the fruit from the soil. 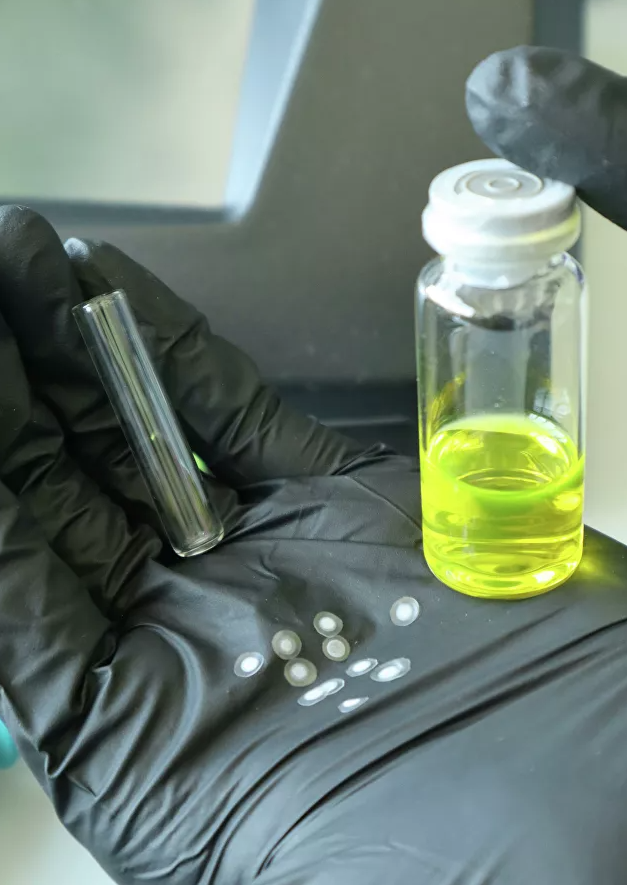 Unfortunately, enzymes are extremely sensitive tostorage conditions. The fact is that they are very easily destroyed due to temperature changes or, for example, humidity. This is why high quality laboratory analysis is not cheap.

A solution of natural polymers rescues the enzyme fromloss of desired properties. In such a "package" it can be stored for at least one and a half years without worrying about the conditions. Now laboratory enzymes "live" on average from several days to several months. The new method has no analogues in terms of simplicity and efficiency, the authors of the development note.

The finished product is dried "droplets" of gel withdose of enzyme, they look like tiny circles made of rice paper. Moreover, one analysis on laboratory equipment with such a drug will cost a maximum of 100 rubles.

Recall that a pesticide is a substance (or a mixture of substances)chemical or biological origin, intended for the destruction of harmful insects, rodents, weeds, pathogens of plants and animals, and also used as a defoliant, desiccant and growth regulator.

Pesticides are used to destroy eithercessation of the development of insects, ticks, mammals (rodents), bacteria, viruses, fungal spores, harmful vegetation and other living organisms that damage crop and livestock production and cause deterioration in the quality of agricultural products, materials and products. They are also used to combat parasitic organisms and vectors of dangerous human diseases.

Chemicals as pesticidesused in the days of the most ancient civilizations: in Greece and Rome. In the Odyssey, in Canto 22, Homer uses the modern concept of fumigation (fumigation) in connection with the use of sulfur for treating buildings and the surrounding area, and calls sulfur "cleansing" (disinfection). 400 BC e. Democritus recommended spraying plants with a pure infusion of olives (olives) without salt to prevent rotting and insect damage. He also suggested treating the seeds with hare cabbage juice: this plant is rich in tannins and organic acids, which have a negative effect on pathogens.